Every few years on federal budget night, we are told with much fanfare, income tax cuts are on the way! Since the 1980s these meagre tax cuts have done little more than reign in bracket creep (if that). The most powerful tax cuts are those that are so significant they shift people’s behaviour towards entrepreneurialism. Aside from reducing the debt itself, our Debt and Deficit policy will greatly reduce the size of government, allowing for substantial tax cuts.

Our current tax laws are so large and complicated that literally nobody understands (or has even read) all the rules. A low flat income tax will simplify our tax system, making it more equitable, efficient, and transparent. Our tax policy will reduce bureaucratic and compliance costs, reduce complicated tax minimisation and evasion schemes, encourage more investment and more efficient labour supply.

By introducing a high tax-free threshold we will ensure that no low-income worker is required to pay income tax, and we will remove the high effective marginal tax rates which trap some people in a cycle of poverty. By indexing tax brackets we will end the dishonest rort that is bracket creep, where the government quietly increases tax by billions of dollars every year as inflation moves people into higher tax brackets.

The tax cut that brings about the greatest increase in prosperity is a tax cut on business… but it is also the least politically popular. Lower company tax rates would both encourage global firms to base their operations in Australia and enable greater growth of existing local businesses, which will lead to more jobs and higher wages.

By removing company tax on reinvested profits, Australian businesses will have a strong incentive to invest in new capital, which leads directly to higher wages and more jobs. These policies represent the most "pro-worker" policies of any political party in Australia because it ensures more people have jobs and that productivity and wages increase into the future.

The truth of tax cuts is that while they decrease the tax rate (leading to less revenue), they actually increase the tax base (leading to more revenue), and in some instances this can actually result in a net increase in tax revenue. This concept is explained by the Laffer curve, which shows the relationship between tax rates (x-axis) and tax revenue (y-axis). As tax rates increase there is initially an increase in revenue, but if tax rates get too high, then they become counterproductive and they both hurt the economy and also raise less revenue for the government.

Based on dynamic tax modelling, the Liberal Democrats believe that Australian income taxes are currently above the "Laffer Maximum" and need to be slashed to a point well below that maximum. 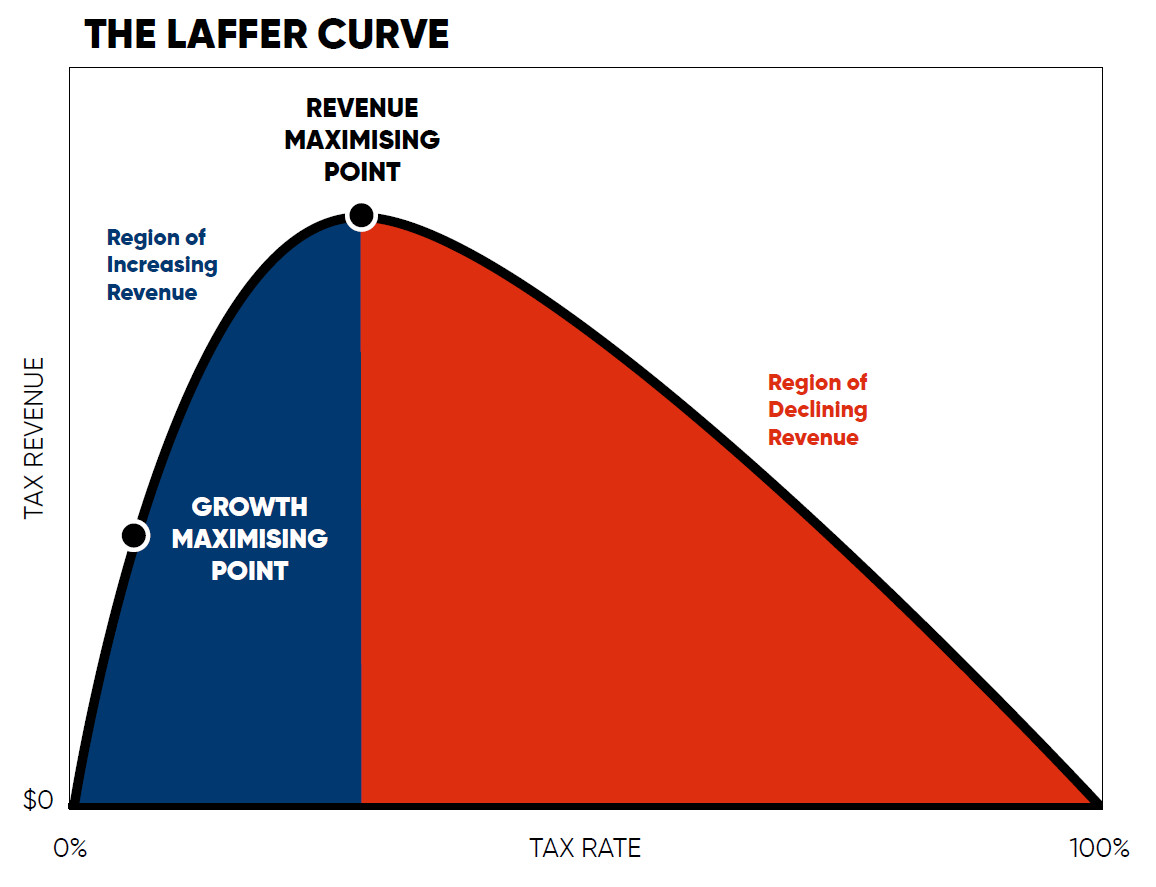