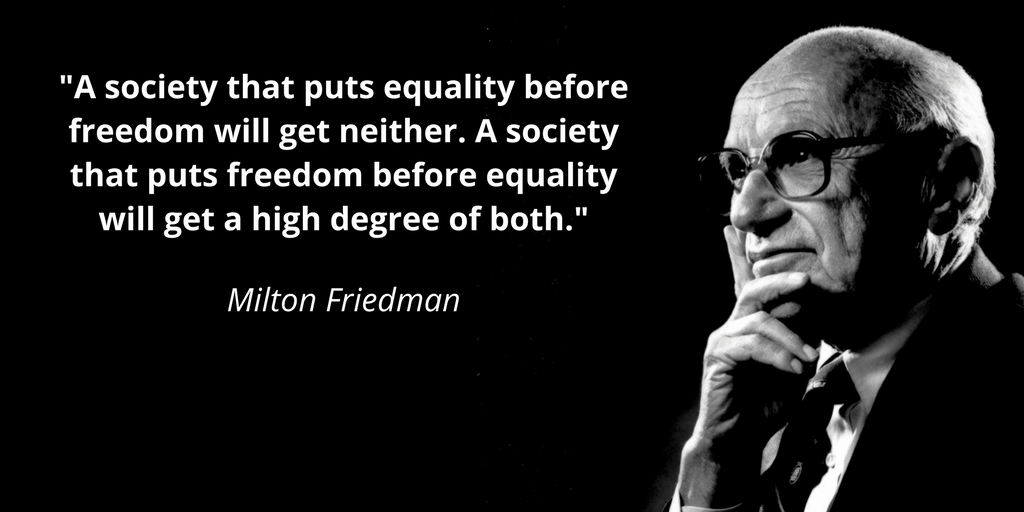 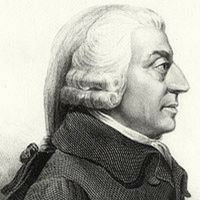 The eighteen century Scottish philosopher, Adam Smith is best known for his book,The Wealth of Nations, the first modern work of economics.The Wealth of Nations expounds that the free market, while appearing chaotic and unrestrained, is actually guided to produce the right amount and variety of goods by a so-called “invisible hand”. When an individual pursues his self-interest, Smith argued that he indirectly promotes the good of society: “by pursuing his own interest, [the individual] frequently promotes that of the society more effectually than when he intends to promote it.”

Self-interested competition in the free market, Smith demonstrated, would tend to benefit society as a whole by keeping prices low, while still building in an incentive for a wide variety of goods and services.

An often-quoted passage from The Wealth of Nations is:

“It is not from the benevolence of the butcher, the brewer, or the baker that we expect our dinner, but from their regard to their own self-interest. We address ourselves, not to their humanity but to their self-love, and never talk to them of our own necessities but of their advantages.”

Smith is widely regarded as the father of modern economics. 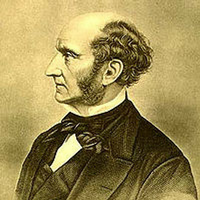 19th century English philosopher and Member of Parliament, John Stuart Mill was an influential liberal thinker of the 19th century whose works championed freedom of the individual in opposition to state control. He was an exponent of “utilitarianism”, an ethical theory developed by Jeremy Bentham.

Mill’s book “On Liberty” addresses the nature and limits of the power that can be legitimately exercised by society over the individual. In this he articulates the fundamental libertarian tenet that each individual has the right to act as he wants, so long as these actions do not harm others.

If an individual action only directly affects the person undertaking the action, argued Mill, society has no right to intervene even if it feels that the person is harming him/herself or the action is generally considered immoral.

Mill defined “social liberty” as protection from the tyranny of political rulers which he was first to recognise could dwell within an otherwise free and democratic state as the “tyranny of the majority”.

Anticipating the modern libertarian argument that while criminals could violate your rights only governments could take them away, Mill argued that social liberty was obtained by placing constitutional limits on government power so that individual freedom was protected. The political efforts to achieve this, he believed, marked the evolution of human civilization.

“I cannot but conclude that the struggle between liberty and authority is the most conspicuous feature of history.” 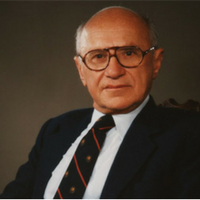 Milton Friedman was an American economist, statistician and public intellectual, and a recipient of the Nobel Memorial Prize in Economic Sciences.

In the 1970s he was instrumental in overturning the influence of Keynesian and socialist economic theories on democratic governments by his reformulation of classical laissez-faire economics.

As leader of the Chicago School of Economics, Friedman had a widespread influence in shaping the research agenda of the entire profession and became the leader of the first recognized counter-revolution against Keynesianism, advocating laissez-faire policies of deregulation, privatisation, low tax and free markets. In the 1960s he promoted an alternative macroeconomic policy called monetarism. In this he argued that the central government could not micromanage the economy because people would realize what the government was doing and shift their behavior to neutralize the impact of policies.

Not limiting his philosophy to economics alone, Friedman opposed government regulation of many types, and although his economic theories were widely admired by Conservatives, his advocacy of the same principles of freedom in social policy sometimes put him at odds with Conservative admirers. He once stated that his role in eliminating U.S. military conscription was his proudest accomplishment, and throughout his life he called for the decriminalization of drugs, individual choice over abortion and strongly advocated Gay rights. His support for school choice led him to found The Friedman Foundation for Educational Choice.

In his 1962 book Capitalism and Freedom, Friedman advocated policies such as a volunteer military, freely floating exchange rates, abolition of licensing of doctors, a negative income tax, and education vouchers. His books and essays were widely read and even circulated underground behind the Iron Curtain.

Friedman’s political philosophy, which he considered classically liberal and libertarian, stressed the advantages of the marketplace and the disadvantages of government intervention and regulation. His ideas were studied throughout the world, and played a major role in the transformation of China’s economy. 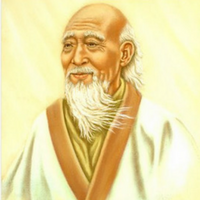 Many regard Chinese philosopher Lao Tzu as the world’s first libertarian.

Born around 600 BC in what is today the Henan province of China, Lao Tzu worked as a keeper of archival records in the Imperial Library of the Zhou Dynasty court.

Lao Tzu subsequently founded the religious philosophy of Taoism, which he set down in his famous book, the Tao-Te Ching, as a collection of 81 profound sayings.

“Tao” is often translated as “the Way,” and refers to the indefinable order or nature of the universe. Lao Tzu’s philosophy, Taoism, argues that simplicity is the key to truth; that behavior should be governed by instinct; and that life should be lived with naturalness, love, respect, and “nonaction.”

Lao Tzu specifically advocated “inaction” as the proper function of government, “since only inaction can permit the individual to flourish and achieve happiness.” Any intervention by government, Lao Tzu declared, would be counterproductive, and would lead to confusion and turmoil.

After referring to the common experience of mankind with government, Lao Tzu came to this incisive conclusion:

“The more artificial taboos and restrictions there are in the world, the more the people are impoverished…. The more that laws and regulations are given prominence, the more thieves and robbers there will be.” 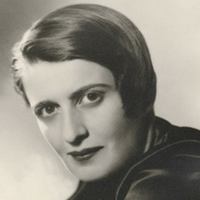 Ayn Rand was a Russian-born philosopher and best-selling novelist who fled the Bolshevik revolution to settle in America. She is most widely known for her opposition to collectivism and for developing a philosophical system, called Objectivism, based upon the primacy of individual freedom.

Objectivism holds that reality exists independent of consciousness; that individual persons are in contact with this reality through sensory perception; that human beings can gain objective knowledge from perception through the process of concept formation and inductive and deductive logic; that the proper moral purpose of one’s life is the pursuit of one’s own happiness or rational self-interest; that the only social system consistent with this morality is full respect for individual rights, embodied in pure laissez faire capitalism.

Rand’s magnum opus is the novel Atlas Shrugged, which chronicles a dystopian social-democratic United States where leading innovators, ranging from industrialists to artists, finally refuse to be exploited by elected tyranny. Woven into the narrative, Atlas Shrugged expresses many facets of Rand’s philosophy, including the advocacy of reason, of individualism, of the market economy and the failure of government coercion.

Rand’s political views, reflected in both her fiction and her theoretical work, emphasize individual rights (including property rights) and laissez-faire capitalism, enforced by constitutionally limited government. She was a fierce opponent of all forms of collectivism and statism, including fascism, communism, and the welfare state, and promoted ethical egoism while condemning altruism.

“I am not primarily an advocate of capitalism, but of reason. If one recognizes the supremacy of reason and applies it consistently, all the rest follows.” 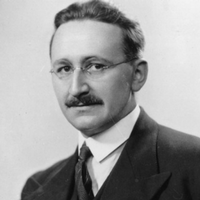 Friedrich Hayek was an Austrian-born economist and philosopher, and a major critic of John Maynard Keynes. Hayek’s account of how changing prices communicate signals which enable individuals to coordinate their plans is widely regarded as a seminal achievement in economics. This and other contributions have led to Hayek being regarded as one of the most influential economists of the modern period, advocating a return to the proven classical economic model. Hayek is generally regarded as the grandfather of contemporary neo-liberalism.

In the 1930s Hayek was concerned at the general view in Britain’s academia that Fascism was a capitalist reaction against socialism. Instead, Hayek argued that Fascism was simply a militaristic form of socialism, and showed in his now famously prescient book, The Road to Serfdom, that all forms of socialism inevitably led to equivalent tyranny.

Hugely influential from first publication up to the present day, The Road to Serfdom makes a strong case against centrally-planned economies and shows how the best intentioned “wealth redistribution” initiatives of socialist regimes inevitably impoverish and finally enslave their hapless populations, leading finally to the collapse of the regimes themselves.

In his final years, Hayek said in an interview that his greatest satisfaction was to have lived long enough to see his predictions in the 1930s of the fall of the Soviet Union realised. 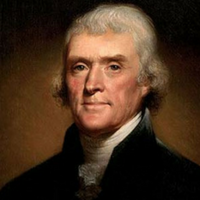 Thomas Jefferson, the third President of the United States (1801–1809) and the principal author of the Declaration of Independence, was one of the most influential Founding Fathers for his promotion of the ideals of republicanism in the United States.

As a political philosopher, Jefferson was a man of the Enlightenment and favoured states’ rights and a strictly limited federal government. Jefferson supported the separation of church and state and was the author of the Virginia Statute for Religious Freedom.

Jefferson’s words in the Declaration come down to us as an almost poetical expression of libertarian principles in legal form:

We hold these truths to be self-evident, that all men are created equal, that they are endowed by their Creator with certain unalienable Rights, and that among these are Life, Liberty and the pursuit of Happiness.