Australians are disappointed in their politicians; what they long for is leadership and inspiration.

In this, the sixth alternative budget by the Liberal Democrats, I propose a grand bargain between the Commonwealth and the States. It will require leadership to implement and, while it contains enough ammunition for a thousand scare campaigns, it’s also inspiring. There’s something in it for everyone and it would set Australia up for decades of sustainable prosperity.

The aim of my budget is to reduce the size of government. Both at the Commonwealth and State level, taxes are holding us back. Furthermore, only a fraction of the tax we pay is returned in the form of public services, because so much is lost to bureaucracy.

I propose unprecedented tax cuts at both the Commonwealth and State level. To fund this, spending on two of the biggest costs to the budget must be tackled — education and health. Government-owned schools and hospitals should begin to charge for their services, as non‑government schools and hospitals already do. In conjunction with that, the government should convert its support for schooling and healthcare into vouchers that are properly targeted at low and middle‑income Australians.

High income Australians would be better off too, as they would have more money in their pockets due to tax cuts which would more than compensate for no longer having access to ‘free’ government schooling and healthcare.

This ambitious alternative budget is supported by budget documents, parliamentary library analysis and costings by the parliamentary budget office. It is a responsible blueprint for Australia’s future and a roadmap for inspiring leadership.

A grand bargain between the Commonwealth and the States would allow Commonwealth taxes to be cut by more than $200 billion each year, or more than $8,000 for every Australian.

Personal income tax should be cut to a flat 20 per cent, with a tax-free threshold of $40,000. This would leave more of the money of taxpayers in their own pockets, to be spent or saved according to their priorities rather than the priorities of bureaucrats. This would also lessen the tax system’s discouragement of working and saving.

Company tax should also be cut to 20 per cent so that foreign investors don’t flee our shores, taking jobs with them. Taxes on foreigners applying to invest in Australia should also be abolished.

The mess of superannuation should be cleaned up by abolishing tax on superannuation contributions and earnings, but taxing withdrawals at the new personal income tax rate of 20 per cent. This would avoid double taxation, encourage saving and self-sufficiency, and delay the point at which the Government gets its grubby hands on our money.

The raft of Commonwealth taxes on things we buy should also be abolished. It is not the role of government to fiddle with our spending decisions by specifically taxing our purchases of fuel, alcohol, tobacco, imports, banking and overseas travel.

As a small offset for these significant tax cuts, the Commonwealth Government could generate some additional revenue by charging permanent migrants for entry to Australia. This would improve the productivity of our migrant intake, as it would discourage family reunion and other migrants who have little prospect of earning income in Australia. 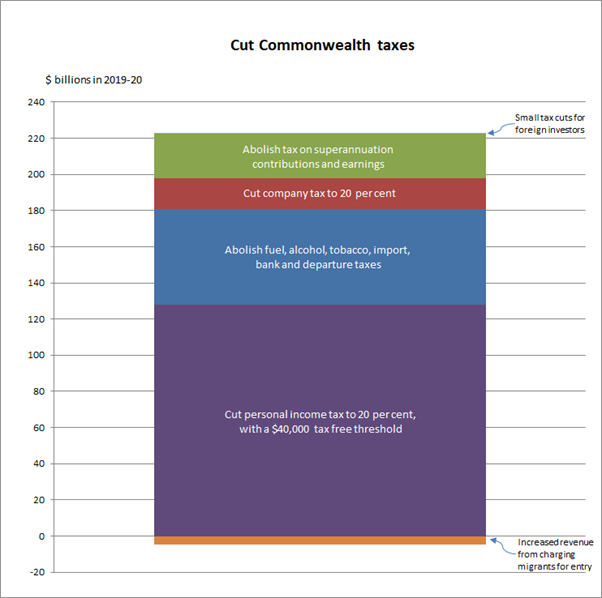 Where we would cut Commonwealth taxes

A grand bargain between the Commonwealth and the States would also allow more than $40 billion of tax cuts at the State level.

The first tax to be abolished in any tax reform should be the country’s most damaging tax — stamp duty. Taxing the purchase of a home means many would-be owners are stuck in the world of renting. Stamp duty also discourages people from moving house when their place of work changes, adding to commuting times, and from upsizing or downsizing to suit changed circumstances. Stamp duties also apply to the purchases of cars and insurance, discouraging both.

Other car taxes like registration fees have been ramped up from year to year without any link to the cost of roads and policing. These taxes should be halved. And new taxes on private parking services should be abolished.

Gambling taxes should also be abolished. These taxes go into the general coffers of our state governments rather than towards problem gambling programs. Most gamblers are not problem gamblers and their pastime should not be taxed more than anyone else’s pastime.

Finally, State payroll tax is a tax on jobs that duplicates Commonwealth pay-as-you-go income tax and should be cut. For example, a 20 per cent cut in payroll tax would reduce the rate in New South Wales from 5.45 to 4.35 per cent. 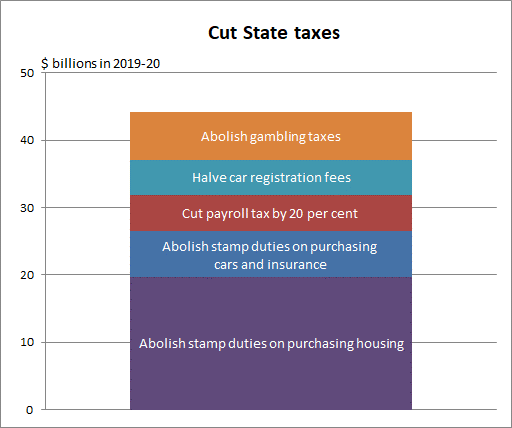 Where we would cut state taxes

Tax cuts must be accompanied by even bigger spending cuts to ensure that governments live within their means and start paying back the debt burden hanging over future generations.

This approach would benefit everyone except the bureaucrats.

Government-owned service providers would find that the bureaucrats, with their arbitrary and changeable targets, are no longer their bosses. Instead, their bosses would be the users of their services.

Middle and high income Australians who use government-provided services would have more than enough extra cash in their pockets, as a result of tax cuts, to pay for these services. And society would be better off overall as we would no longer be wasting money on Soviet-era central planning bureaucracies.

The main government-run services which would no longer be ‘free’ under this approach would be public schools and public hospitals.

State Governments would no longer spend $67 billion on schooling and their own education bureaucrats. Instead state schools would charge school fees to recover their costs, and the Commonwealth, which has expertise in means-testing, would provide a mean-tested schooling voucher costing more than $33 billion. This voucher would ensure that low income parents and the parents of children with a disability can afford the same or better schooling compared to what is currently on offer.

In time, the States could take over the means-tested schooling voucher if there were a reassignment of income taxation across the federation.

State Governments would no longer spend $82 billion on public hospitals and their own health bureaucrats. Instead public hospitals would operate independently, charging for their services, while the Commonwealth would provide a means-tested medical expenses and health insurance voucher costing more than $48 billion. This voucher would ensure that low income and chronically-ill patients could afford the same or better health insurance, healthcare and drug treatment than what is currently on offer, with reduced waiting times to boot.

And, as with the schooling voucher, the States could take over the medical expenses and insurance voucher if there were a reassignment of income taxation across the federation.

Stopping the free-for-all of universally available — but generally second-rate — ‘free’ government schooling and healthcare services would go a long way towards delivering smaller, more focussed government while allowing a lighter tax burden on all taxpayers. But beyond the public school and health systems, there remain plenty of other forms of government waste that should be cut.

At the Commonwealth level, higher education subsidies should be abolished so that taxpayers who don’t have a university degree are not forced to subsidise others to obtain a university degree, which brings with it an average million dollars of additional lifetime income. However, income-contingent student loans should continue so that no one needs to pay upfront fees.

Commonwealth industry assistance — including assistance for the defence, renewable energy, arts, sports and tourism industries — should be abolished. So too should foreign aid other than emergency relief, as taxpayers can choose for themselves which causes they wish to assist and how much they would like to contribute. Commonwealth domestic disaster relief should also be abolished, as States are perfectly capable of providing relief in their jurisdiction.

Savings would also be made by defunding research bodies like CSIRO and the Research Council, leaving the funding of commercial research to private bodies and ‘pure’ research to philanthropists. And the ABC and SBS should also be defunded, so that they rely on advertising, sponsorships and subscriptions, like other broadcasters.

The simplification of taxation inherent in the tax cuts proposed here would reduce costs in the Tax Office and at Customs. Cannabis legalisation, and drug decriminalisation more broadly, would reduce the costs of both federal and state police and customs officers. And the abolition of grants to the States, including the transfer of GST revenues, would also represent a reduction in Commonwealth spending as well as a step towards greater accountability within a more functional federation.

New entrants to Australia other than those entering under our humanitarian program should be ineligible for welfare; this would harm no one currently in Australia, and those who come to Australia under this new arrangement would confirm that coming to Australia is still a good deal even without access to welfare.

Unemployment benefits should not be indexed for the duration of a recipient’s unemployment.

Paid parental leave — a payment conditional on a parent being in paid employment prior to a child’s birth — should not be funded by taxpayers who already fund means-tested payments like Parenting Payment and Family Tax Benefit. And Family Tax Benefits should not rise once a child turns 13 simply because teenagers ask their parents for more discretionary spending.

Child care subsidies should be properly means tested because taxpayers should not have to fund subsidies to households where each parent is earning six‑figure sums. Withdrawing subsidies for these households would not prompt a reduction in workplace participation, as a parent won’t give up a six‑figure income just to retain a three or four‑figure child care subsidy. 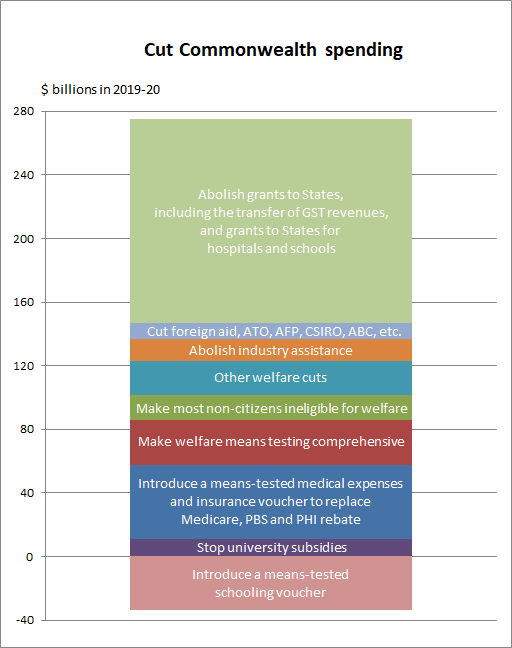 They should stop funding research and providing other industry assistance, including for the arts and sport. Local government is well placed to provide more localised support for art, through local galleries, and to assist sport through the provision of sporting facilities and grounds.

Public housing should be defunded and privatised, particularly given that the Commonwealth provides rent assistance to low-income households that allows them to rent from private landlords. Many feel-good, peripheral environmental programs at the State level can also be discontinued. And cannabis legalisation, and drug decriminalisation more broadly, would reduce the costs of prisons and police. 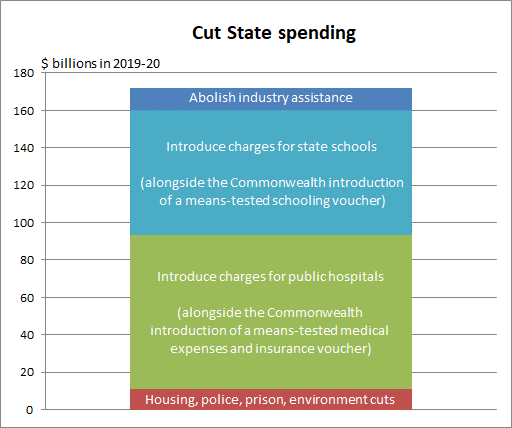 Living within our means and repaying debt

The spending and tax cuts in this alternative budget amount to a near halving of the size of government across the federation. They deliver balanced budgets at the State level, which would ensure that the strength of State balance sheets is maintained. And they deliver a $34 billion surplus at the Commonwealth level so that we can start repaying the debt resulting from more than a decade of budget deficits under both Labor and the Coalition. 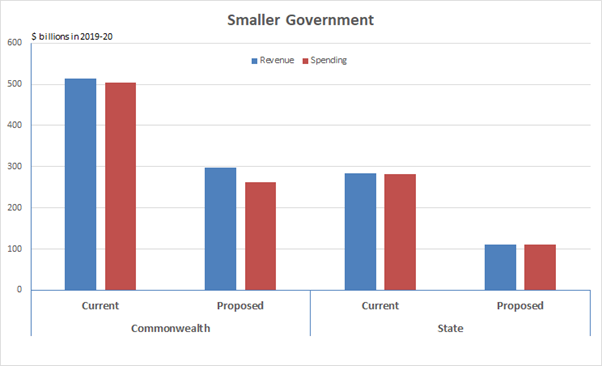 Neither Labor nor the Coalition will adopt my alternative budget before the federal election in May. But after the election we may have Labor governments at the federal level and in most states and territories. This presents an opportunity for truly inspirational leadership. If a belief in means testing and personal responsibility can be re‑awakened in Labor, at least some elements of my alternative budget could be adopted over the years ahead.

Here’s hoping, because my alternative budget focuses government where it is needed, eases the debt burden on future generations, and reduces the burden of tax on Australians so they can make their own decisions about what’s best for them and their families.

Duncan Spender is a Liberal Democrats Senator for NSW and replaced David Leyonhjelm.